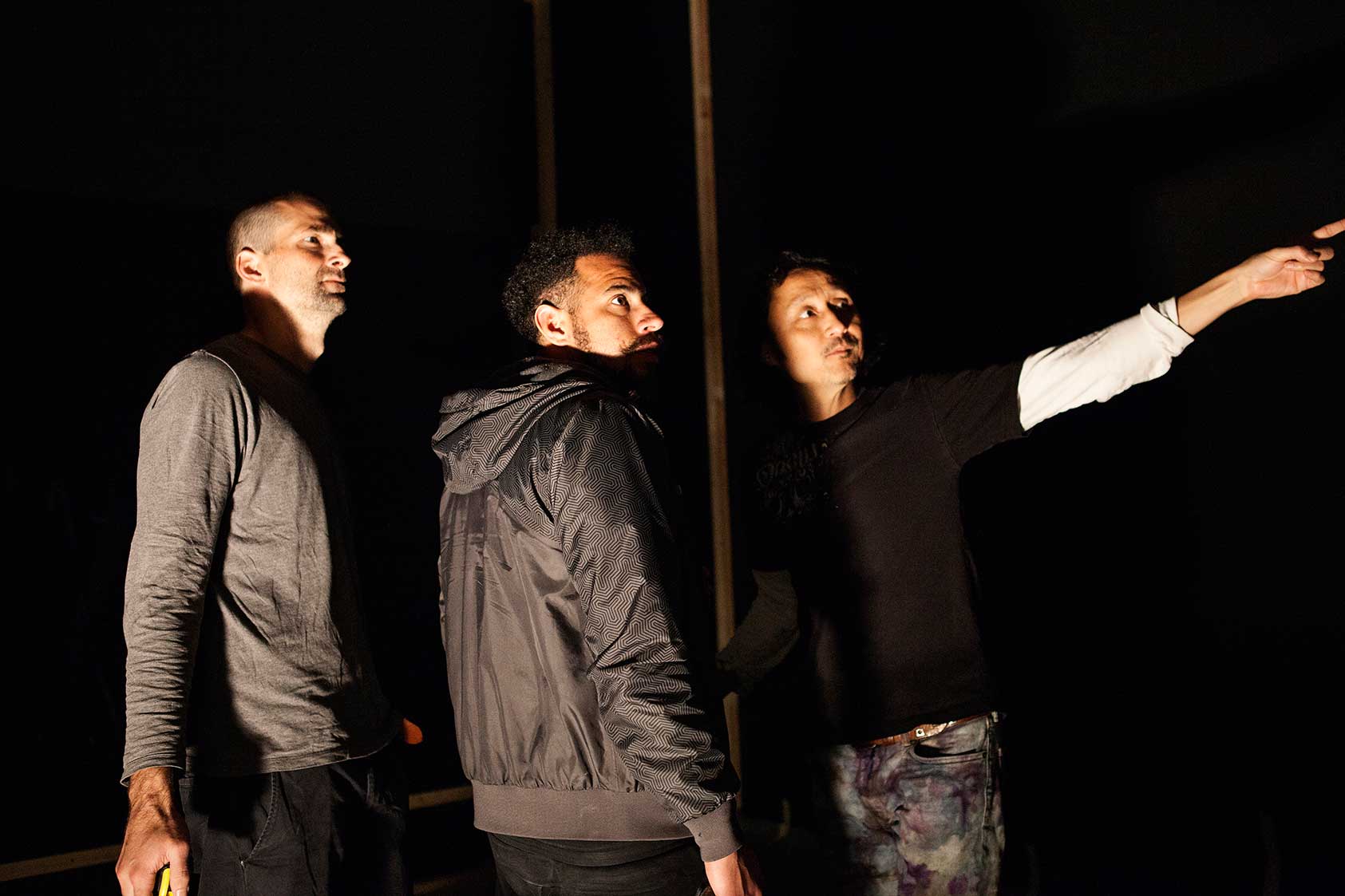 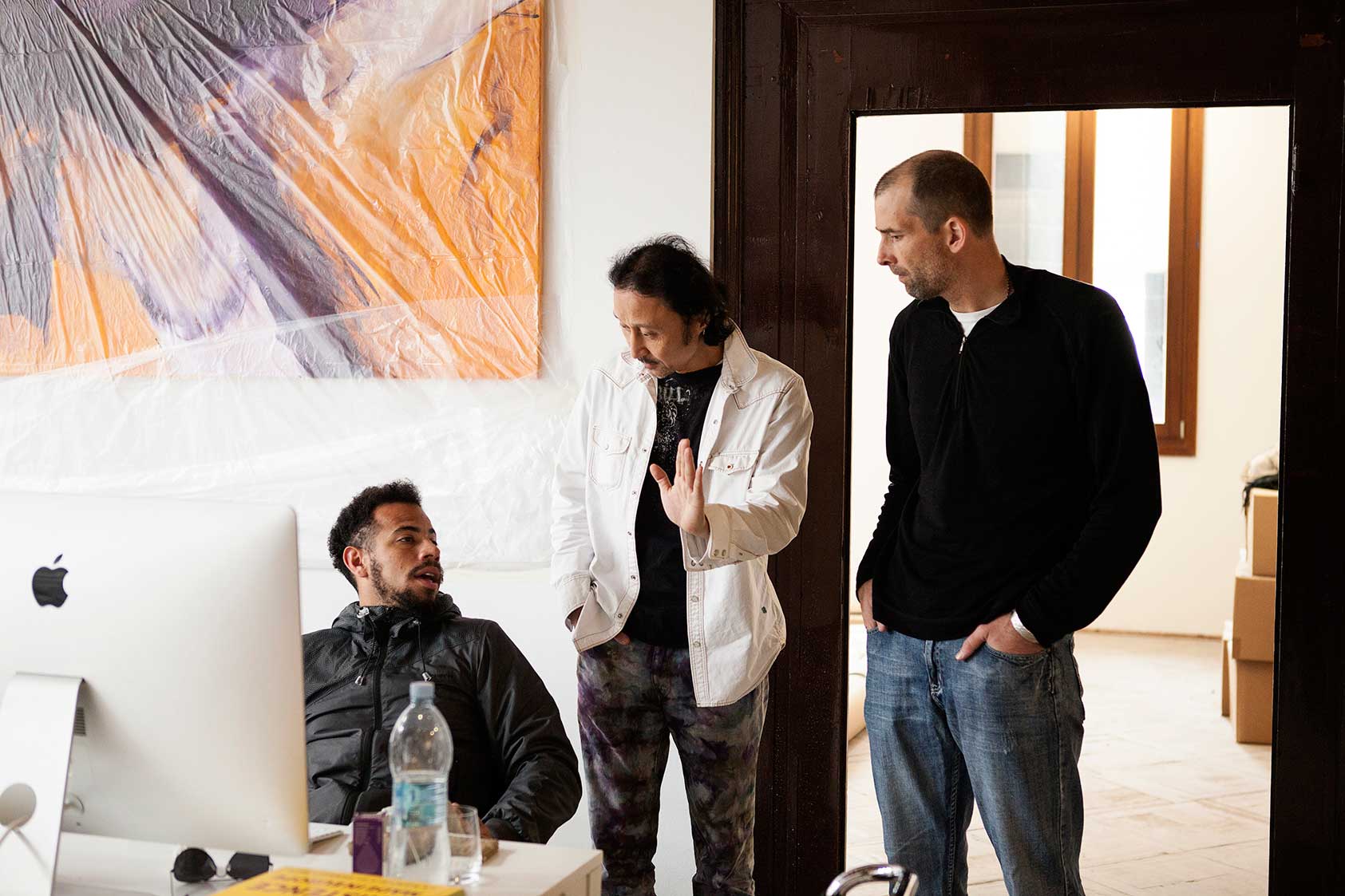 Homologous Topologies in the Site Specific Environmental Installation
" An undulating cosmos shimmers before us like water, at first concealing the spectral image of the edge of a laptop keyboard and a pair of hands. The morphologies of the world are an amalgam of mind and matter unfolding across time and space. Ink is a metonym for an order of intensive processes that are shared across the natural world. It can function equally as an index of the embodied interior state of mind and spirit, channeling qi through its material instantiations, and recording and preserving the flows of motion even in stillness.

Black bleeds into white with a liquid grace. The surface of the rice paper becomes mountain ranges, valleys, and striated ground, shuddering as it swells with ink. A formless horizon, a flash of light, blinding white gives way to a hand holding an invisible brush, painting the shadow forms of mountains and water—shan-shui, the Chinese word that signifies landscape. This landscape, however, is not primarily composed of images. It is a series of homologous flows and processes that give way to shape-shifting forms. It is an amalgam of intensities flowing at a common frequency. Busy red blood cells merge and morph into vermilion ink moving in rivulets across rice paper, swollen with fluid. The crystalline geometries of light and movement in water shape-shift into a maze of rectilinear lines that rearrange themselves into uncanny genealogies of roots and branch, forking paths that fracture into rhizomatic root-scapes, before giving way to rushing river currents that swirl and eddy in their precise-wild dance of mathematics and physics and topological transformation. 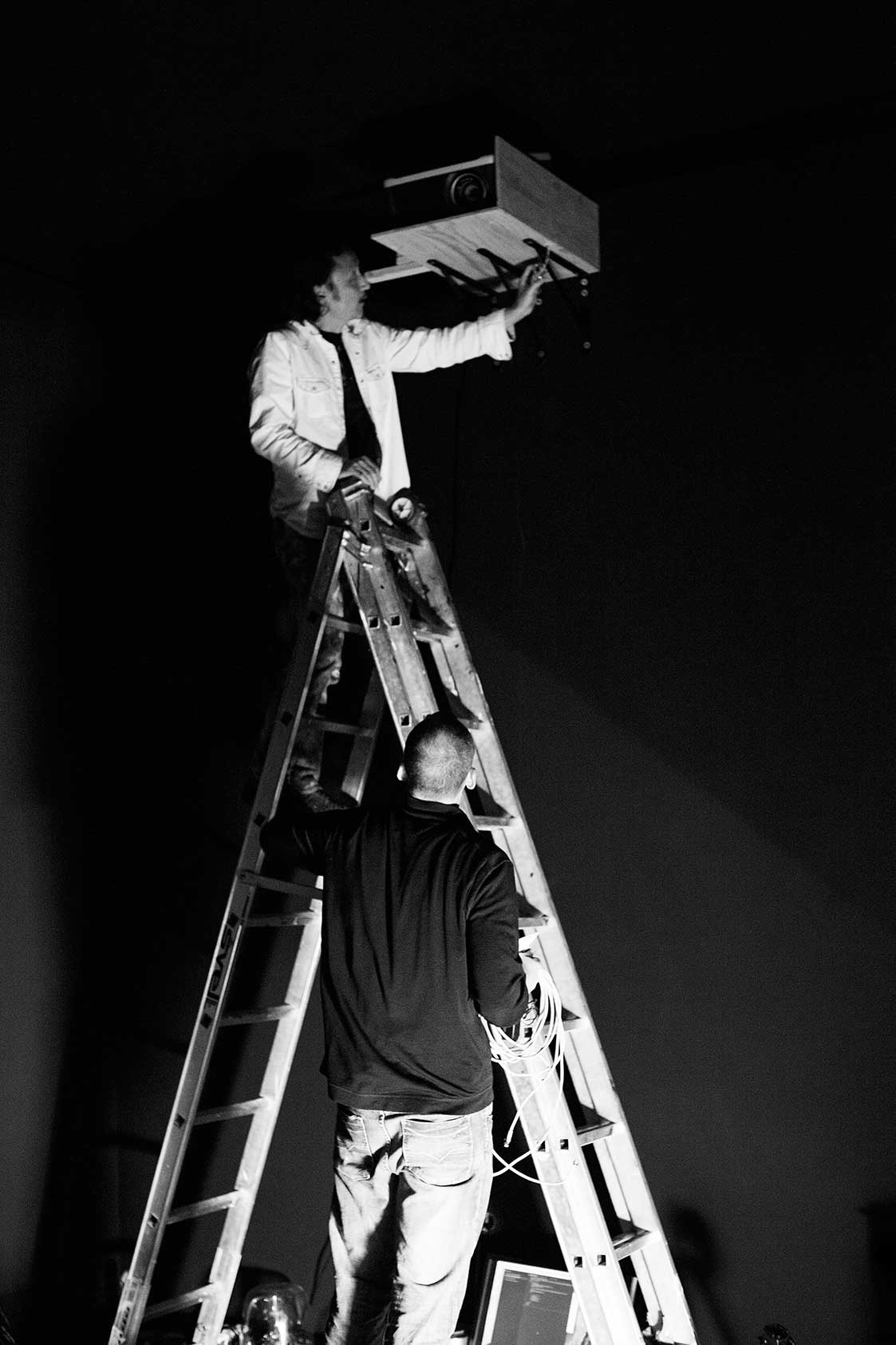 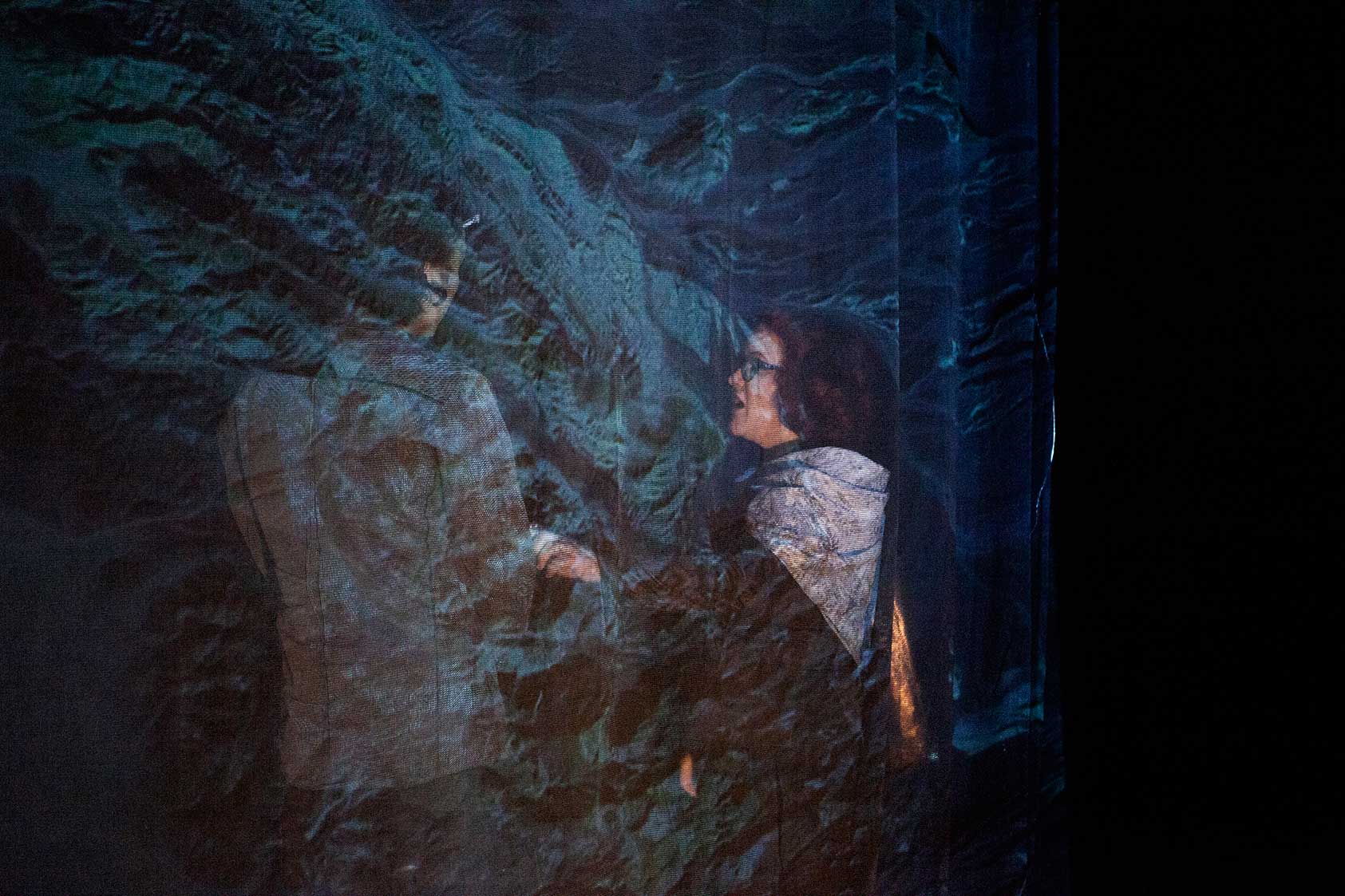 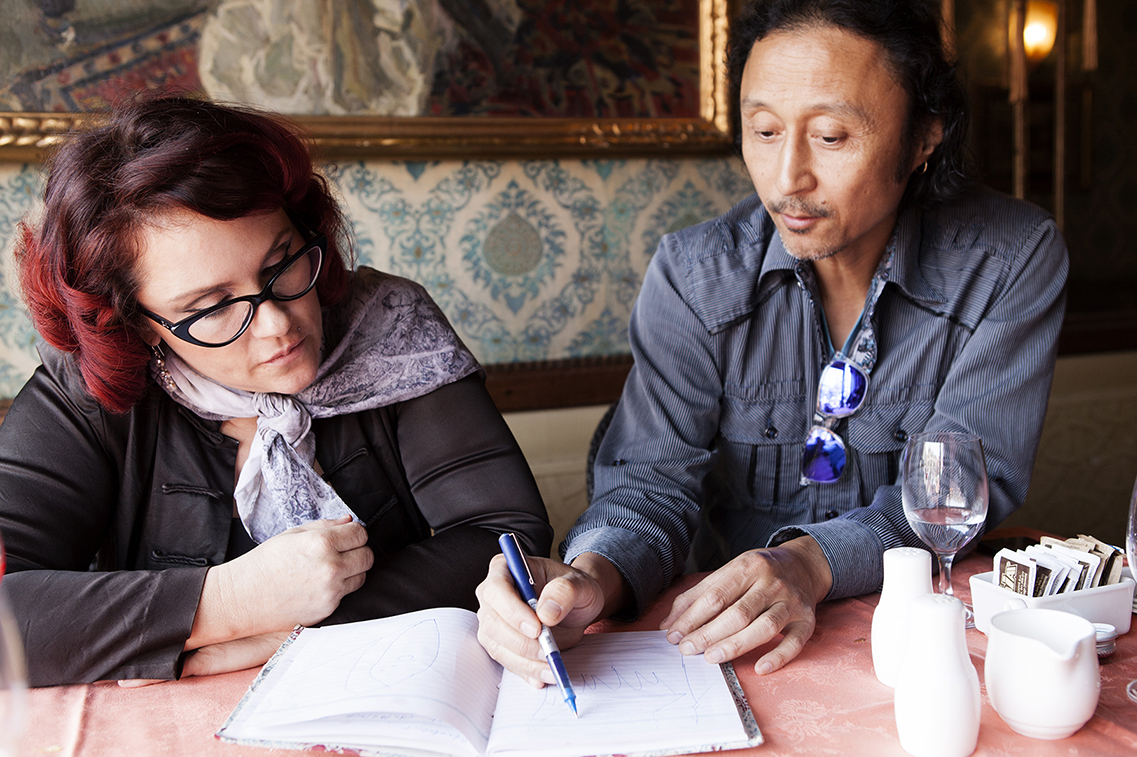 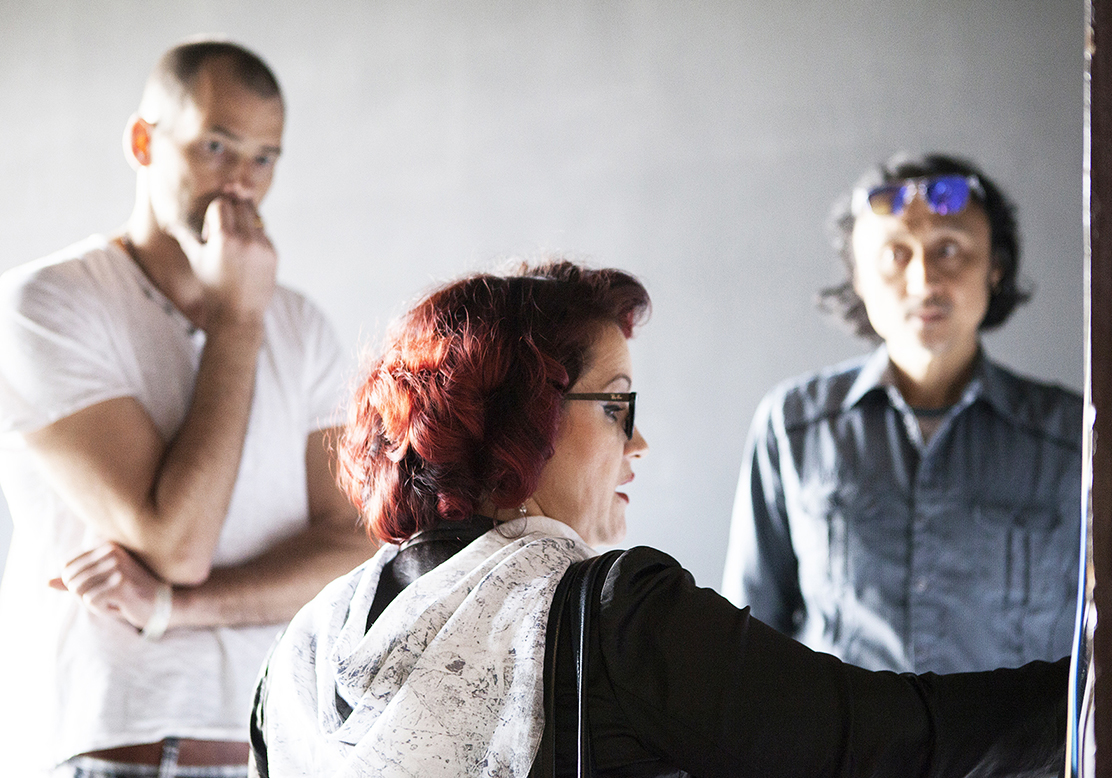 Static line can be rendered to make motion. The curving arc of water forming waves can move without moving. Its movement is latent, implied, understated, understood. The stark dynamism of waves from ancient ink painting shares a secret language of form with dancing waves of neon that leap and surge with a visual intensity as the current accelerates. Roiling white water offers an incantation of forms found in nature. Swirling bubbles emerge from water black as ink. The fractal language of ink maps onto aerial views of mountain that stretch themselves outwards across space at the lithic speed of geology, unfolding into ordered ranges of stolid persistency, yet moving—like the waves and the water—nonetheless.

The expanding ink blot opens into time and space like the mouth of a black hole, or the pupil of an eye, opening to consume light. It is both aperture and void. It is a landscape of homologous topologies—“geometric properties and spatial relations” that share a common structural logic or shared formal ancestry. There is an intrinsic rhythm to its movement and a mysterious yet rigorous logic to its modes of transformation. Like the mythological creature, the chimera, it is both hybrid and shape-shifting."
‍
Becoming Landscape: Diffractive Unfoldings of Light, Space, and Matter in the New Work of Zheng Chongbin
Volume 14, Number 6, November/December 2015.
Yishu Magazine by Maya Kóvskaya. 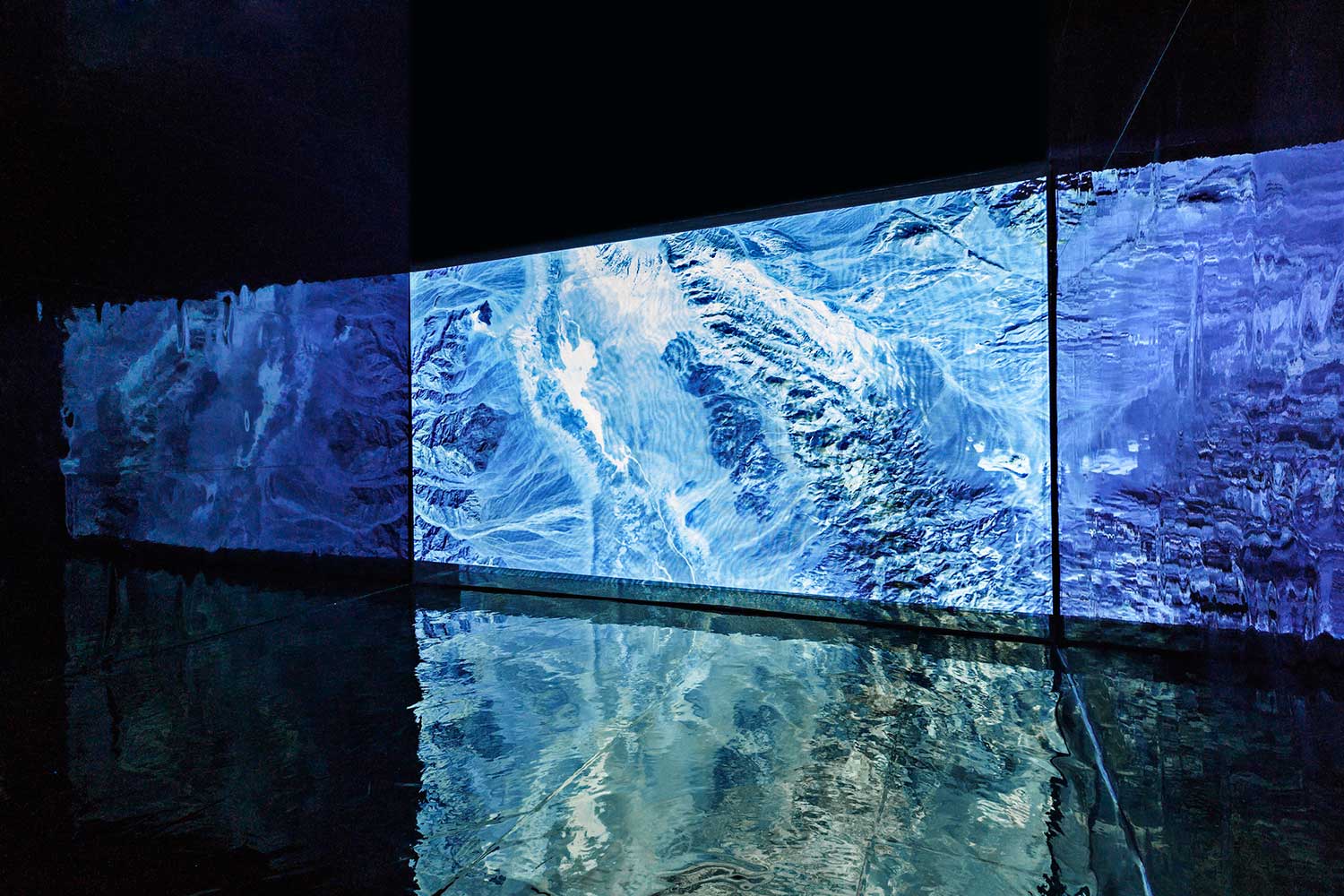 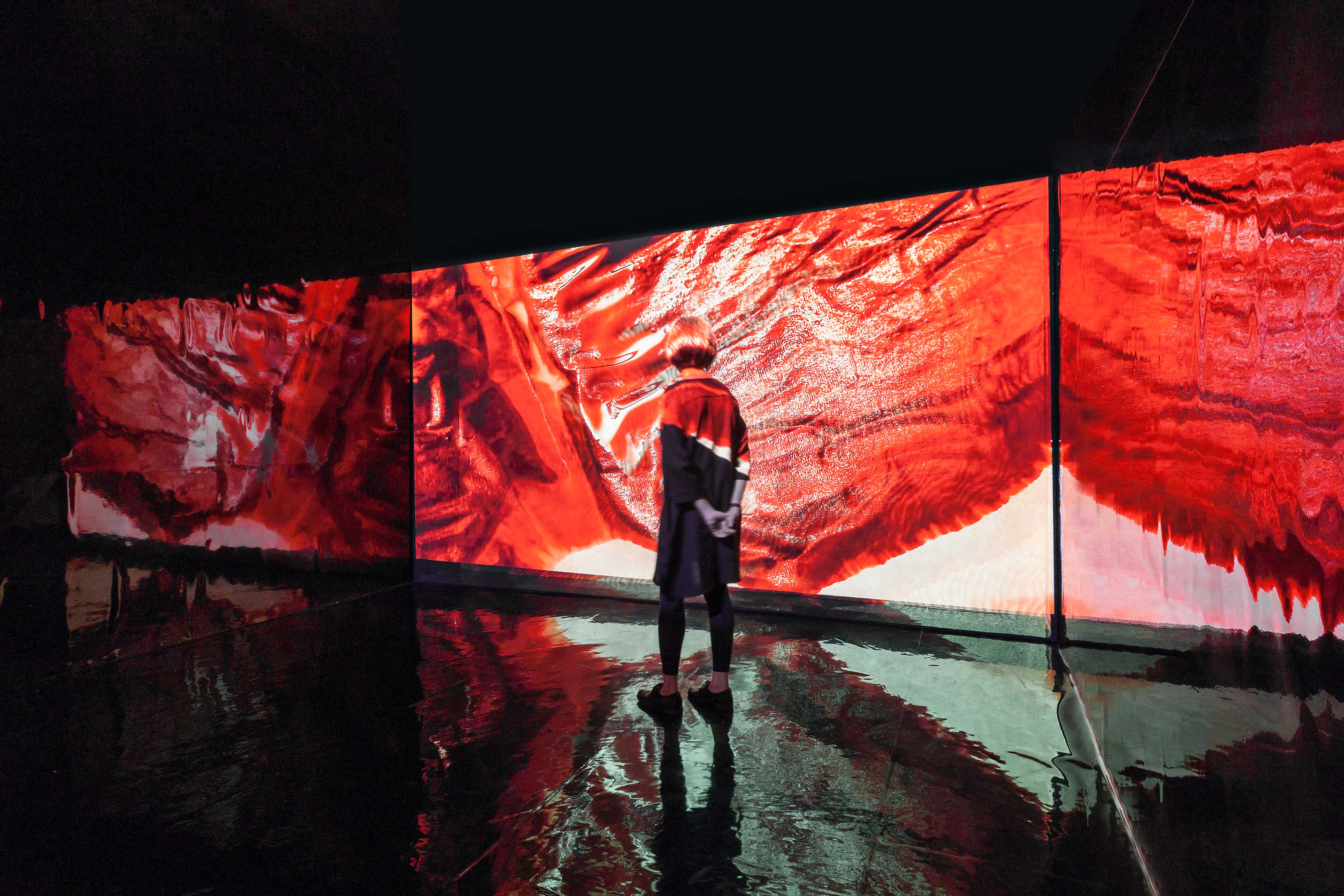 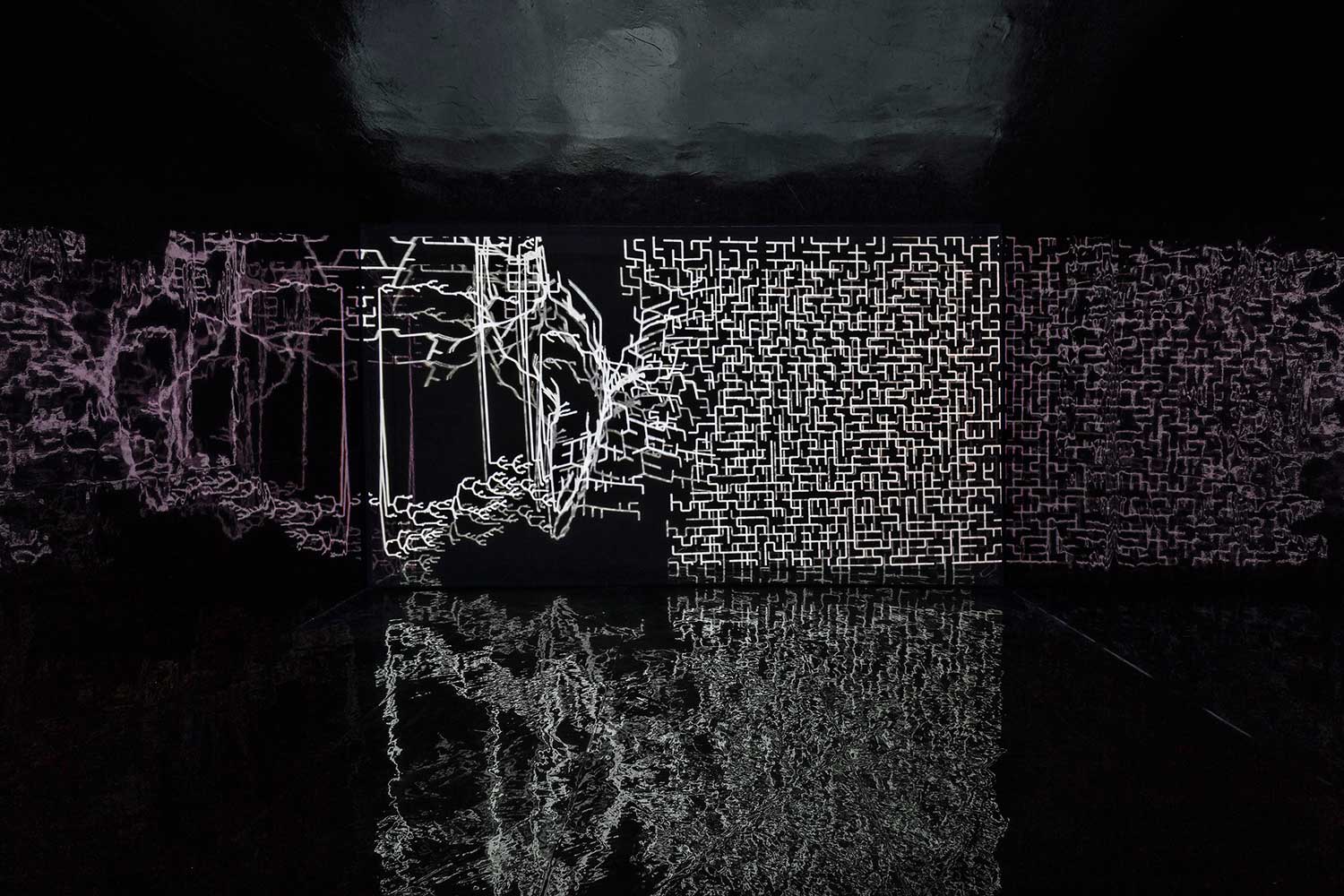 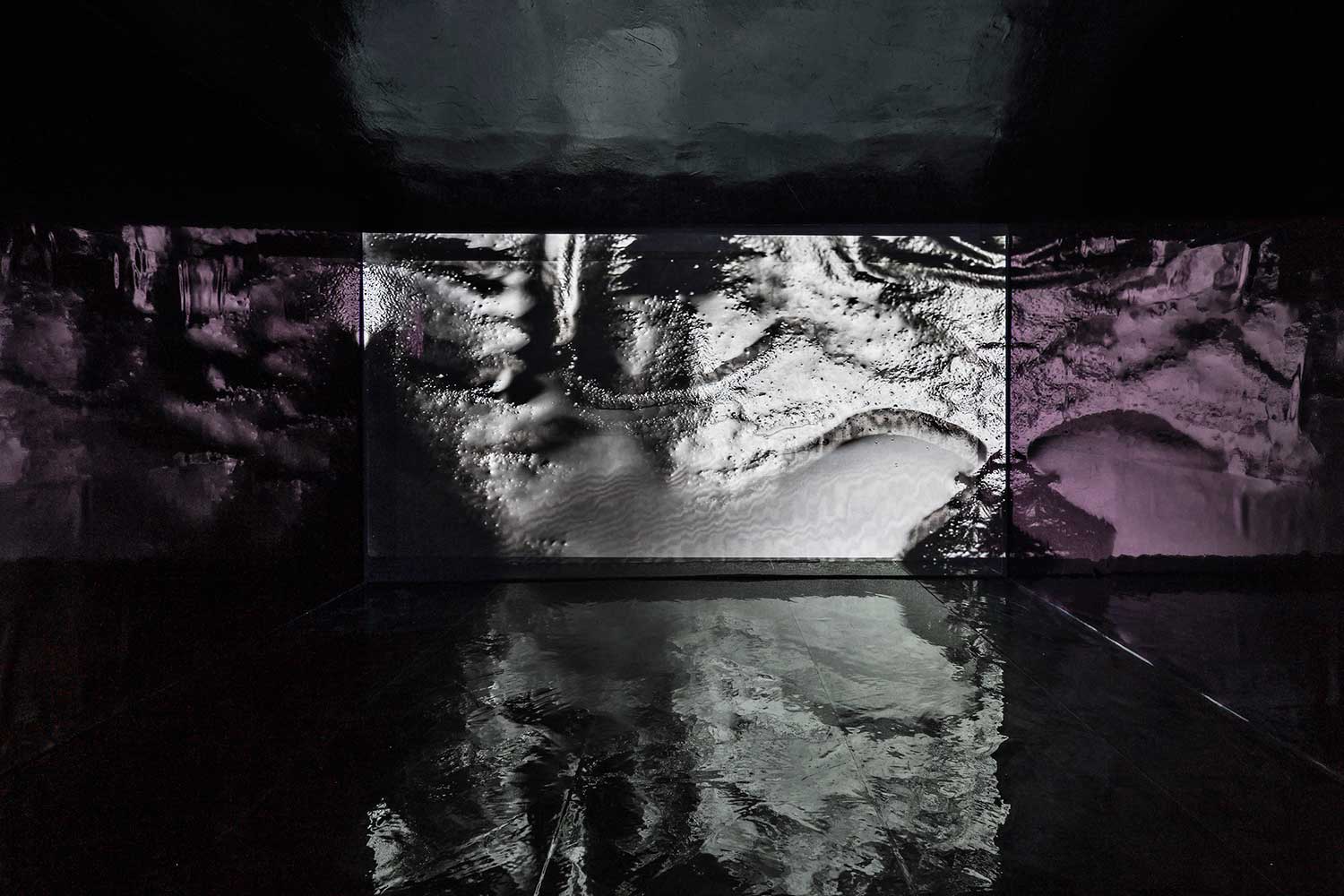 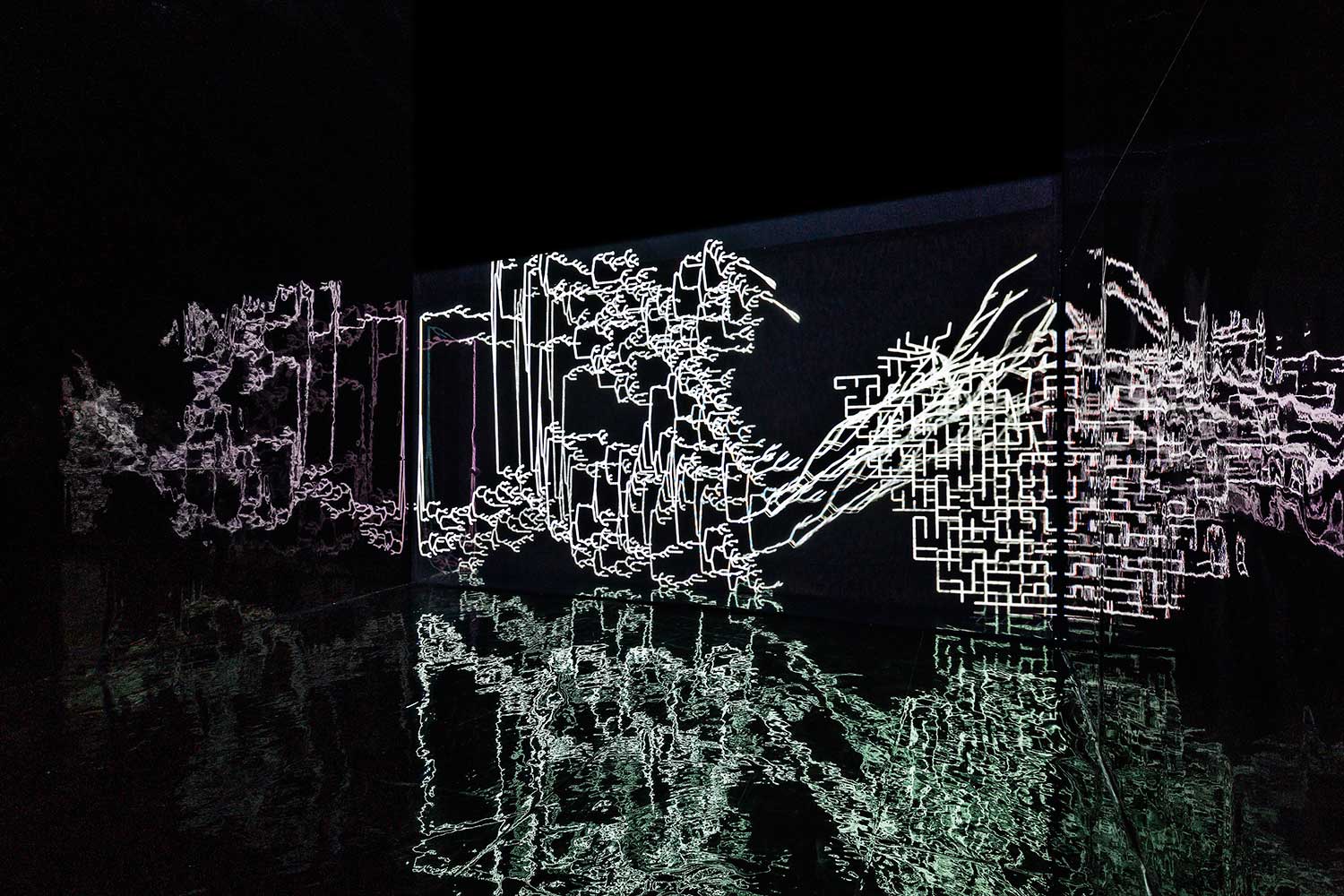